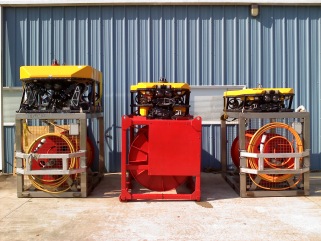 Dec 2010
TRV-005 was displayed for the first time in the Far East by our Sales / Distributors Booth (ROVSCO) at OSEA 2010 in Singapore. The interest generated was extremely positive. Due to this response, the components required to turn this particular TRV-005 into fully operational status will be sent to Singapore immediately. This will allow ROVSCO to actually demo the unit to show potential Clients the real performance of the TRV-005. Specification sheets are one thing…seeing the vehicle perform is quite another.

Nov 2010
Work has commenced on the new TRV-005 surface Control Van / Workshop to comply with DNV / Trinidad Offshore requirements. The new System is scheduled to ship for long term Inspection / Survey work in Trinidad early 2011.
It is anticipated that the TRV-005 will remain in Trinidad to service all localized ROV inspection requirements.

Nov 2010
TRV-M was mobilized to undertake CP readings on the 6 Tendons of a TLP including the video surveys of 9 Risers from surface to Touch down point in 1670 fsw.
The complete inspection / survey was successfully completed in 17 hrs of dive time.

Oct 2010
TRV-HD was used for the first time offshore Gloucester, MA, utilizing specially designed SSI tooling to disconnect a misaligned and ‘locked in’ Tronic underwater mateable connector from a SUTU on a PLEM, the TRONIC connector was hydraulically rotated 180 degrees and reconnected to a test cable pre-installed on the TRV-HD. This allowed engineers to conduct invaluable testing on the PLEM’s sensors which was not thought possible without the cost effective approach of the TRV-HD’s intervention, throughout the testing procedure the TRV-HD hovered on station in auto altitude mode.

The TRV-M was onsite to conduct the additional inspection work required by the Client. Both TRV systems operated flawlessly.

Sept 2010
The TRV-005 operated flawlessly for BGTT in measured currents of 3.8 knots conducting Inspections / Surveys on the Dolphin ‘A’ Platform.
Due to Trinidad’s very high safety standards the TRV-005 System will be returned to SSI’s facility to have a new DNV Certified Control Van / Deployment System constructed and will be returned to Trinidad for future projected work.
To quote Mr. Courtney Lange, Auditor for BGTT,”the performance of the TRV-005 was unquestionable”.
The TRV-HD is scheduled to mobilize to the North East USA mid Sept.

June 2010
Currently, TRV-M & TRV-005 have been mobilized to undertake multiple downed platform surveys in the GOM with an expected duration of 60-75 days.

TRV-005 System to mobilize to Trinidad for BGTTwith the intent of remaining in the area.

May 2010
SSI appoints ROVSCO Asia Pte. Ltd., Singapore as its exclusive representative/distributor for all of SSI’s products and services in the following territory: Singapore, Malaysia, Indonesia, Brunei, Thailand and Vietnam.

Construction has commenced on the newest of the TRV “family”, the TRV-HD.
The TRV-HD will be fitted with the standard 4-camera suite, 5 variable LED lights, altimeter, CP, high-res sonar and dual 5-function manipulators with dual 7-function valve packs and HPU’s. Payload will exceed 150 lbs.
The TRV-HD will have a separate HPU dedicated to run any present day subsea tooling. The vehicle is expected to weigh in at close to 2000 lbs. with forward thrust of at least 460 lbs.

We will update as the HD work progresses.

SSI is proud to be part of the team searching for Amelia Earhart's plane.
Continue Reading
Locate Us On The Map
Copyright © 2018 Submersible Systems Inc | All rights reserved.
Login
Site by SC